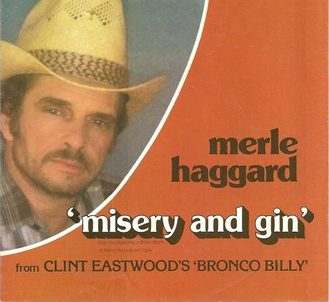 “Misery and Gin” is a song written by Snuff Garrett and John Durrill, and recorded by American country music artist Merle Haggard. It was released in June 1980 as the first single from the album Back to the Barrooms. “Misery and Gin” reached number 3 on the Billboard Hot Country Singles & Tracks chart and peaked at number 4 on the Canadian RPM Country Tracks.Wiki