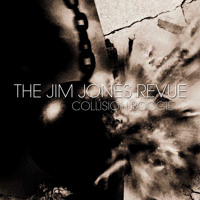 MOJO writes: ONCE YOU’VE ESTABLISHED yourselves as the testifyingest gutbucket rock’n’roll band in Christendom, all slicked-up and flicknifed and primed to deliver 110% live entertainment, where do you go from there? It’s a moot point for Jim Jones Revue, one of the best live groups you’re likely to see, but with a necessarily retrospective shtick that translates less well in recordings, despite the best efforts of all.

The answer, as delivered by their pending new single, Collision Boogie, could lie in texture. There is more to rock’n’roll thrills than out-and-out blasting and this spooky little shimmy could be a neat repositioning exercise, with the usual guitar blamalama on hold and pencil-moustachioed pianist Henri Herbert swopping Jerry Lee Lewis maximalism for Bo Diddley minimalism (we’re thinking Lafayette Leake’s sparse lines on 1958’s Hush Your Mouth).

“Collision Boogie is a sort of personal user’s guide to some of the things that [you] might come crashing into in life,” explains titular singer Jim, who has something of a history in the garage-rocking game. “It was originally inspired from hearing a Jamaican dancehall track blaring out of a car in Hackney; but by the time we had an arrangement together, it ended up with more of a New Orleans flavour.”
Source